On the bridge, eyes out for ice.

A light fog hangs low on the horizon.  The wind is gone.  We are getting close.

The heaving waves of the Bering Strait and Chukchi Sea have been left behind for now as the raging westerlies give way to somewhat calmer easterlies north of the Arctic Circle and the atmosphere’s polar front.  Just east of Barrow, Alaska we reach the Beaufort Sea and water temperature at the ocean surface drops below freezing for the first time.  On the R/V Sikuliaq, from the bridge to the back deck, everybody is watching and waiting for ice.

In many ways sea-ice in the Arctic is the central thread that ties all of us aboard together.  Our floating home and office, the research vessel Sikuliaq, is specifically designed to be ice-capable and gets its name from an Inupiaq word meaning “young sea-ice” or “young sea-ice that is safe to walk on”.  But in a changing Arctic, whether it be supporting a person’s weight or influencing the global climate that supports all humanity, there are real questions about how safe polar ice cover is becoming.  This 261 foot long National Science Foundation funded vessel is our golden ticket to get unique, custom engineered technology to the Beaufort Sea to explore undersea secrets behind the rapidly melting ice in the Arctic, sea-ice that is disappearing in summer faster than current scientific knowledge has predicted.

The Arctic environment is changing at a swift pace, in many ways faster than the lower latitudes where most of the world’s population lives, unable to witness these shifts first-hand.  Recent estimates show the late summer sea-ice minimum has decreased by 50% in terms of area and 70% in terms of ice volume since 1980.  The figure below, adapted from Martin et al. , 2014, shows these estimates of change and the location of our ArcticMix research in the Beaufort Sea.  If we had been in this same patch of ocean at the end of summer even just ten years ago it would have likely been a very different place in terms of ice cover than it is here today.

Small, irregularly shaped chunks floating into view through the fog are the first sign.  Sikuliaq slows to a safe speed as we approach the edge of denser and thicker ice cover.  There’s a low, somewhat distant, grinding sound that rings through the steel hull all around us.  A quiet call goes up and through the science labs – we are finally in the ice!

For some of us, veterans of sea-going oceanography in warmer climes, this may be the first time we’ve seen sea-ice with our own eyes.  As expected as it is this close to earth’s north pole it still can amaze.  At the rail we gather and point while a few cameras snap away, a bit eagerly.  Those that work up here regularly still have a smile on their faces but caution that it is possible to have too many photos of ice.  I’m not so sure.  One thing I’m very certain of is that this is absolutely one of the most peaceful surroundings on the planet.

The frozen seawater is more than a casual hazard to shipping, equipment, and ocean-going science, as the history of the Northwest Passage attests.  But unlike earlier explorers we have the advantage of technology and space-borne remote sensing satellites.  Sikuliaq’s radar reaches out across the sea surface, day and night, helping the bridge avoid thicker ice that could best our capabilities.  And the ship’s dedicated science technicians have built a world-class onboard mapping system that receives regular synthetic-aperture radar (SAR) images captured by RADARSAT from a 800 kilometer high sun-synchronous orbit.

The space-based SAR ice observations arrive at a remarkably high resolution greatly helping the captain, crew, and ArcticMix team to plan routes around and through ice-choked waters.  This radar data is a great comfort as we feel our way towards the most scientifically exciting Arctic locations given we often want to get sensitive oceanographic instruments close to the ice, but not too close.

Even with the most modern nautical tools and information, navigation and science in the Arctic can still be a guessing game and one we hope to win. 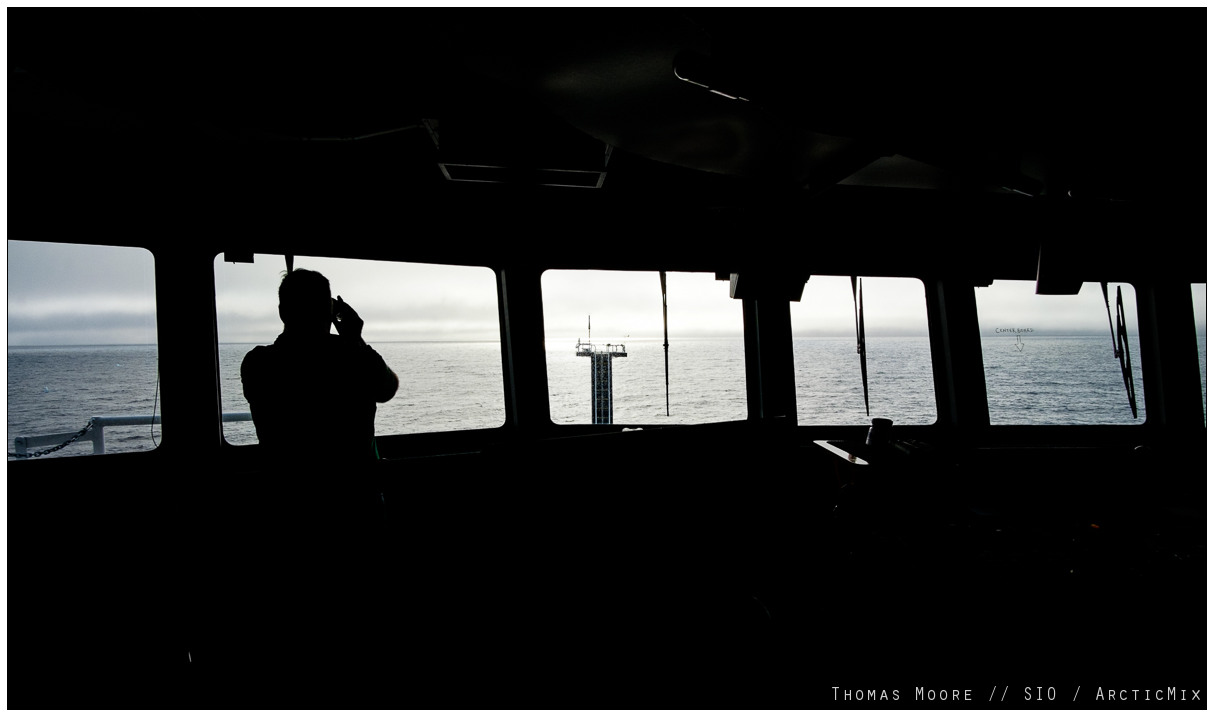 On the bridge, eyes out for ice. 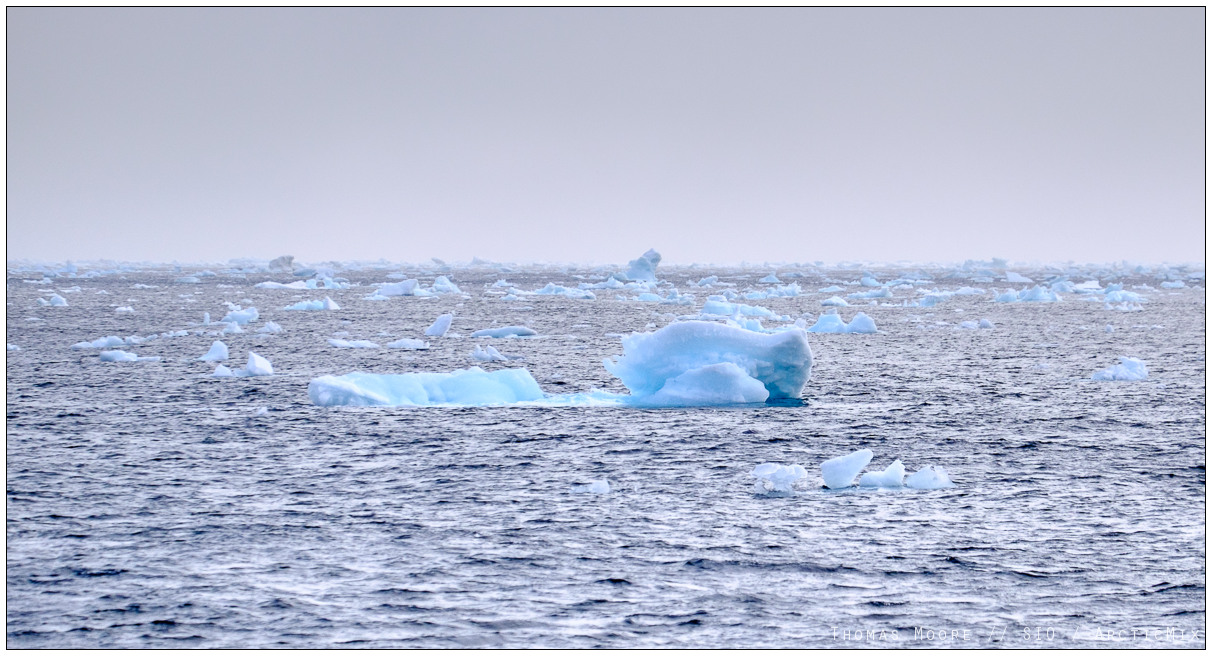 Chunks to the horizon. 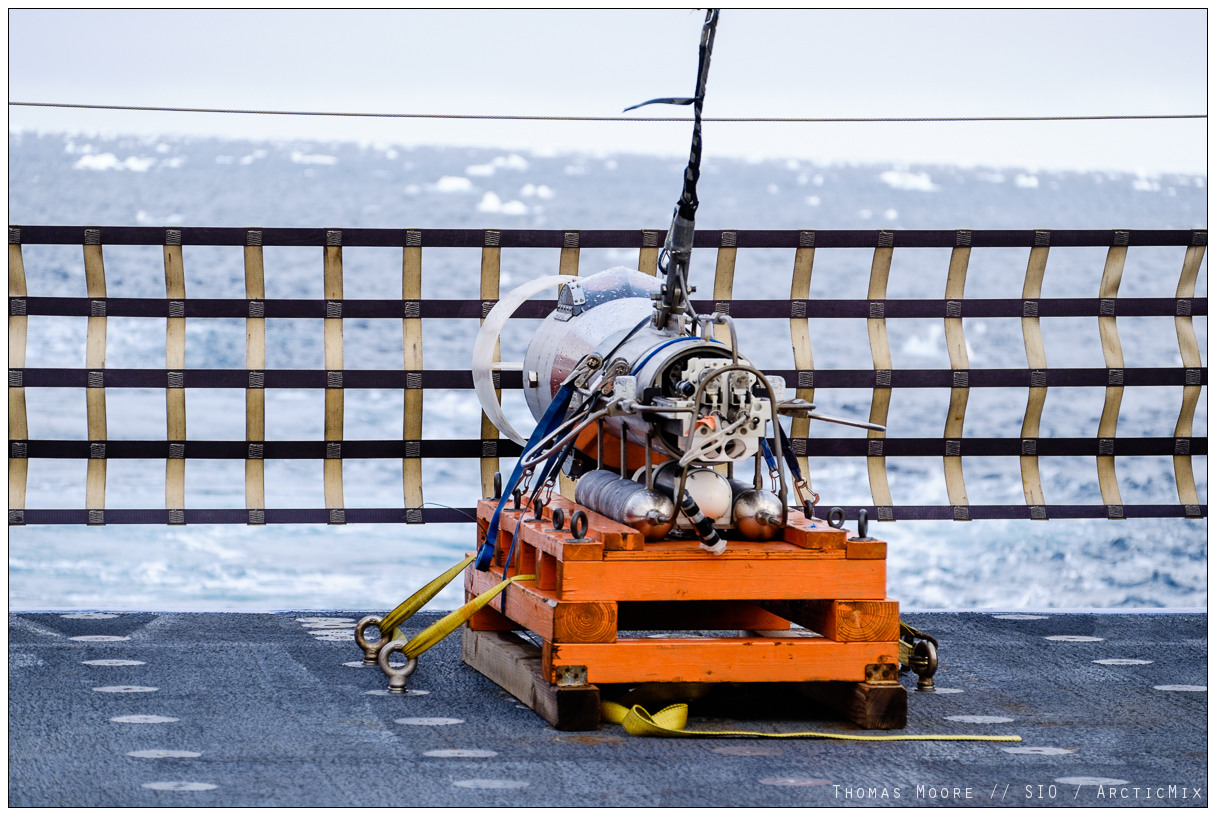 SWIMS on deck. Ice in the sea. The two don’t always mix. 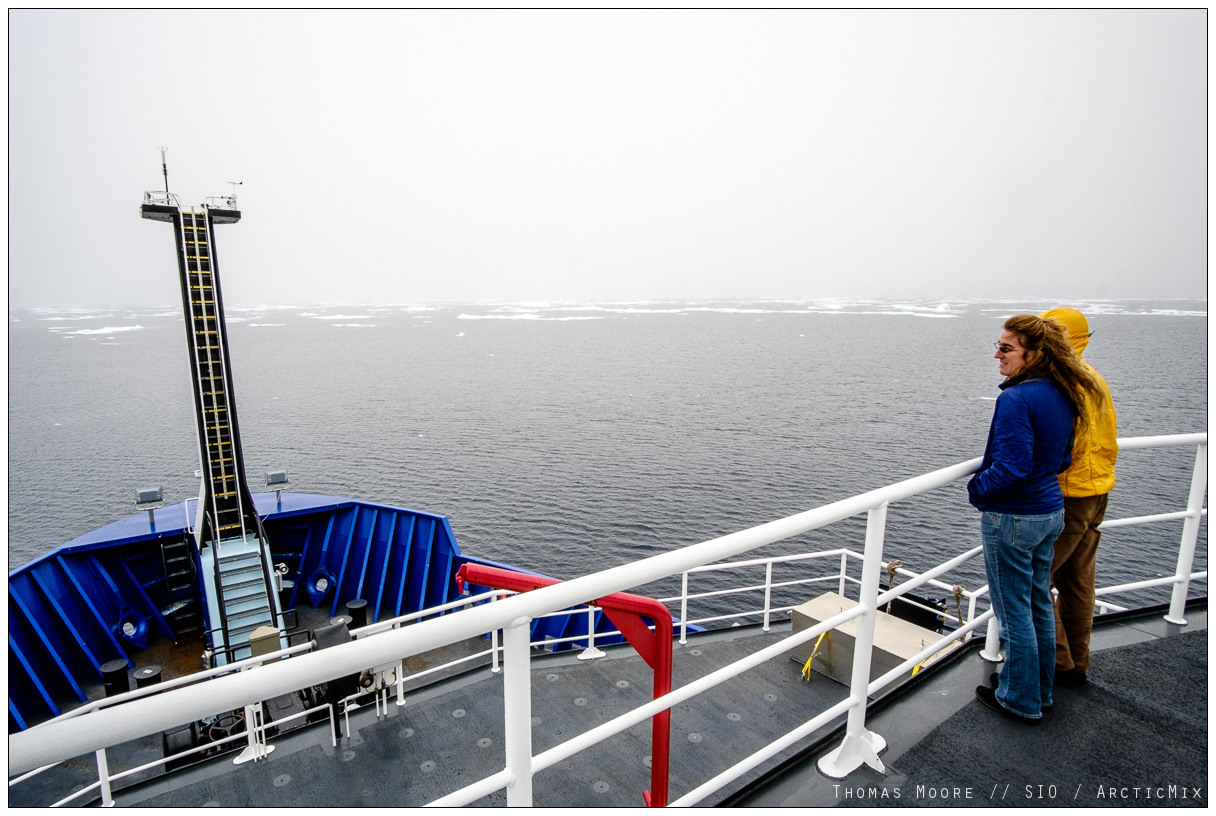 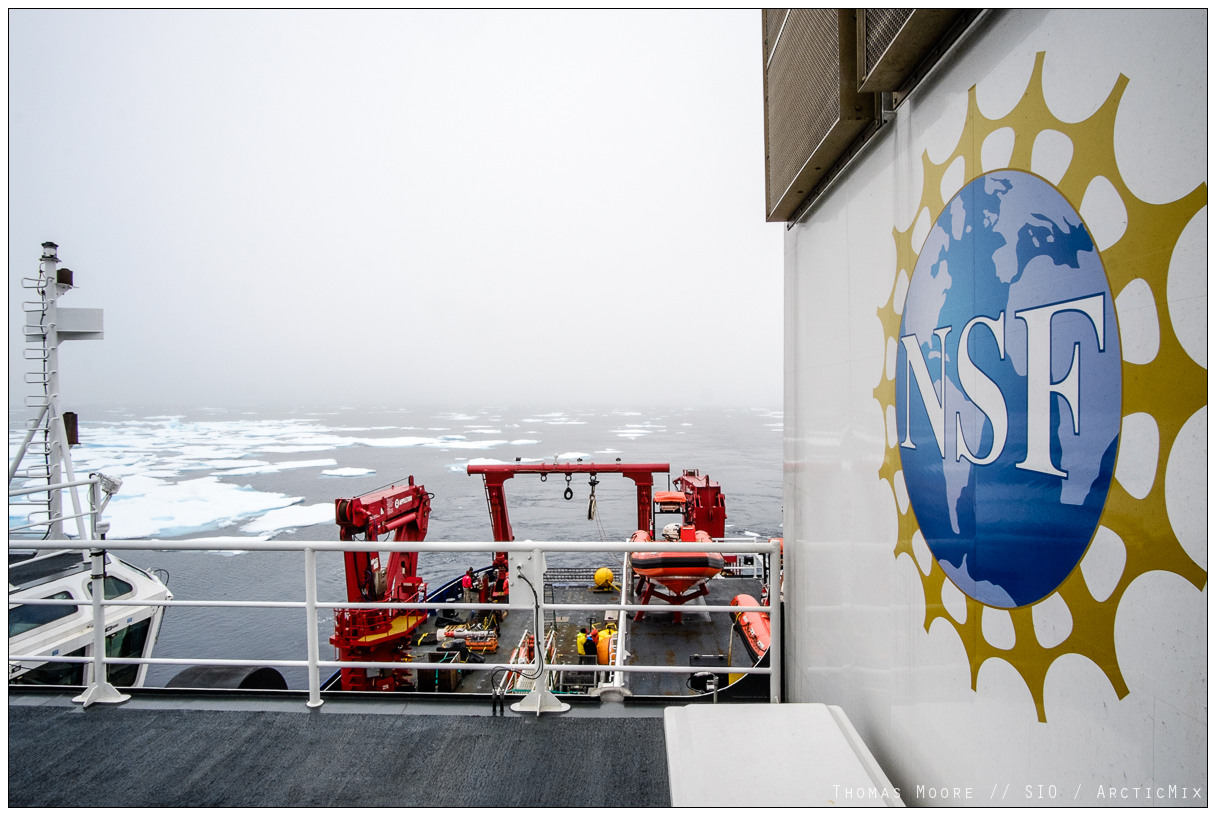 R/V Sikuliaq in the ice. 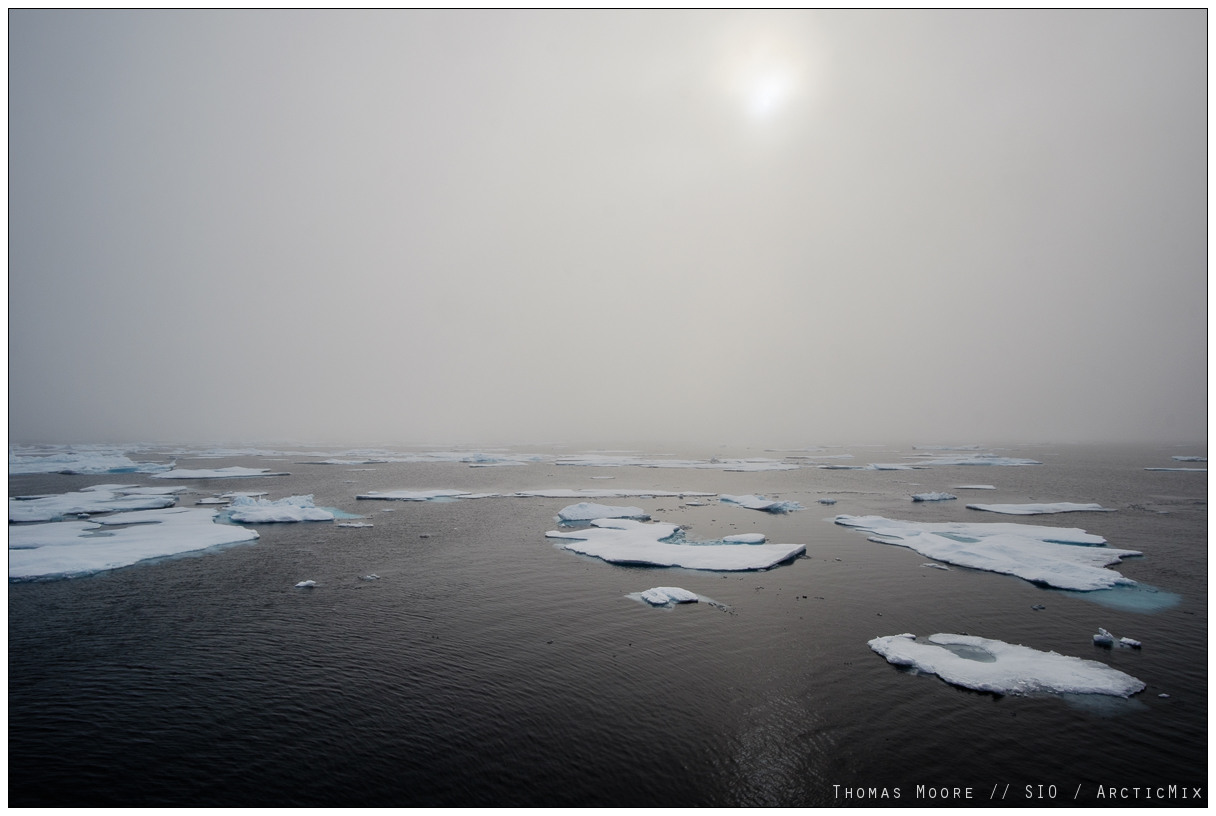 Arctic morning sun tries to burn through the fog. 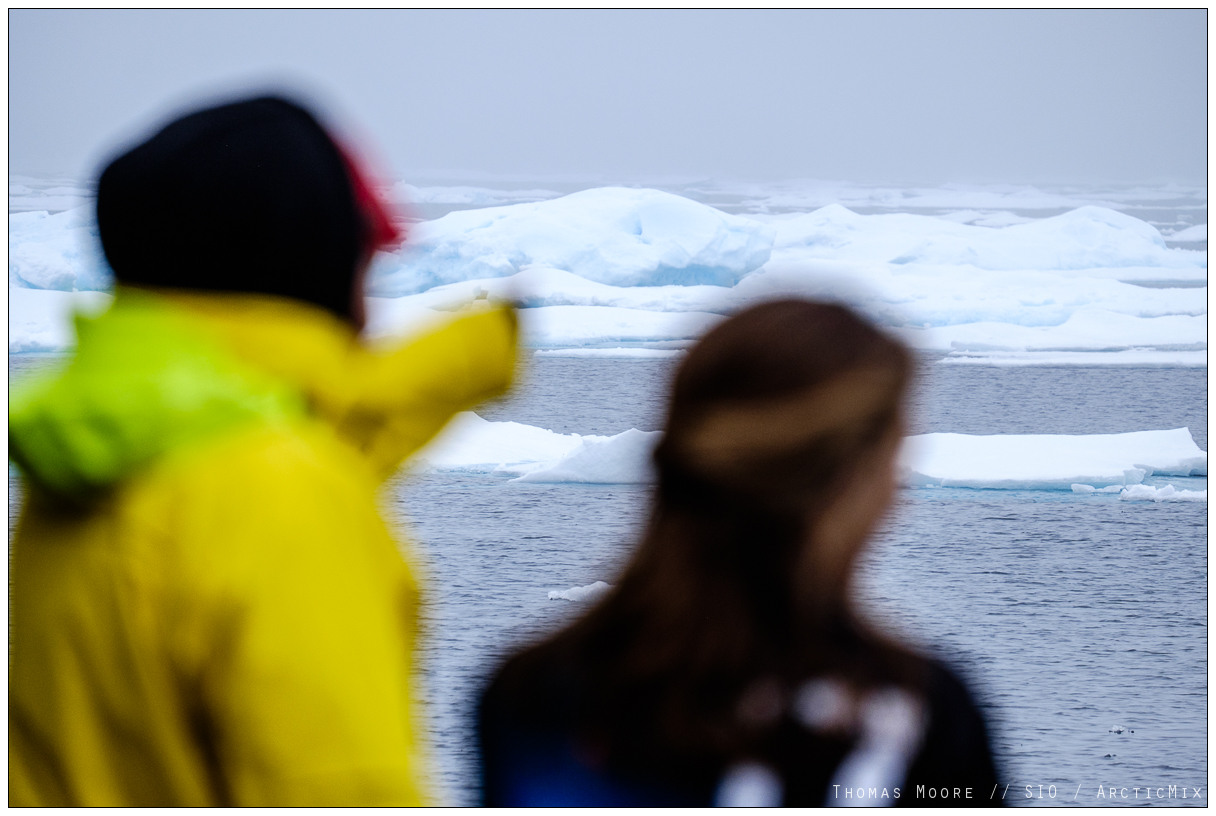 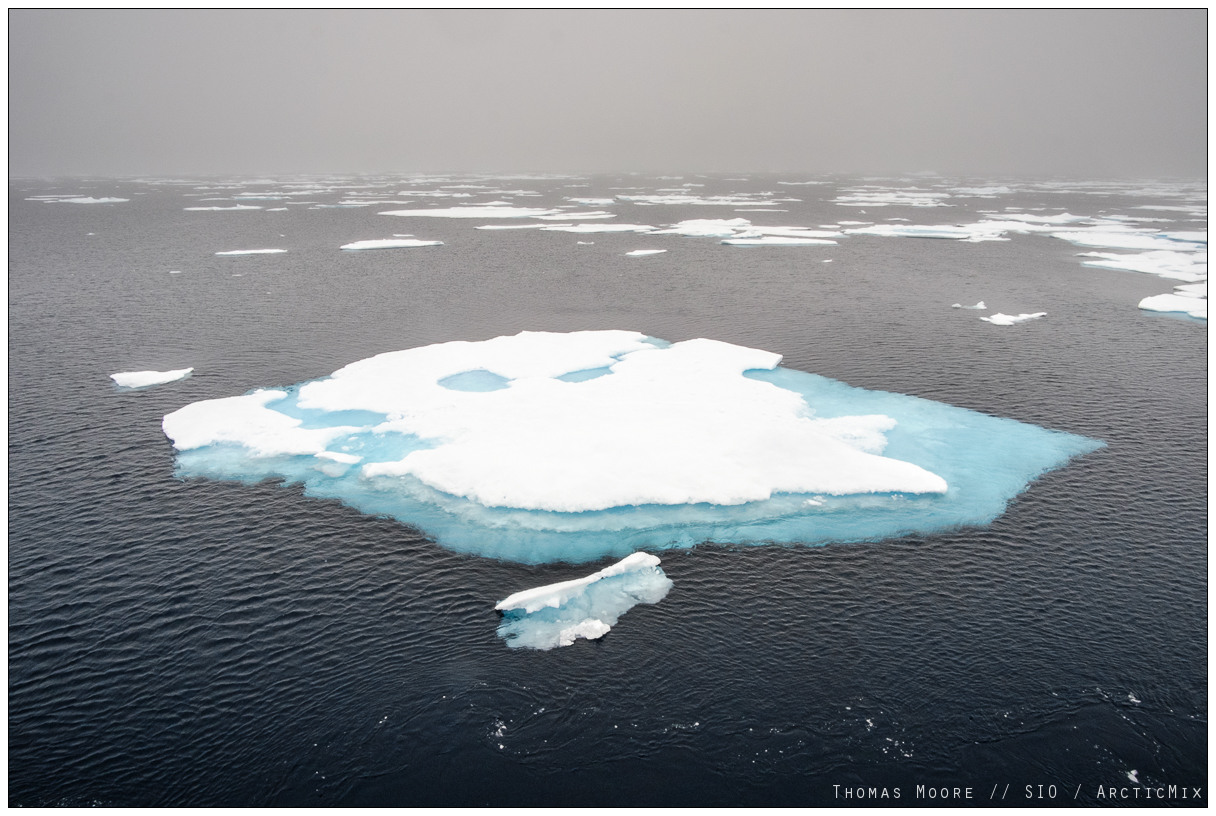 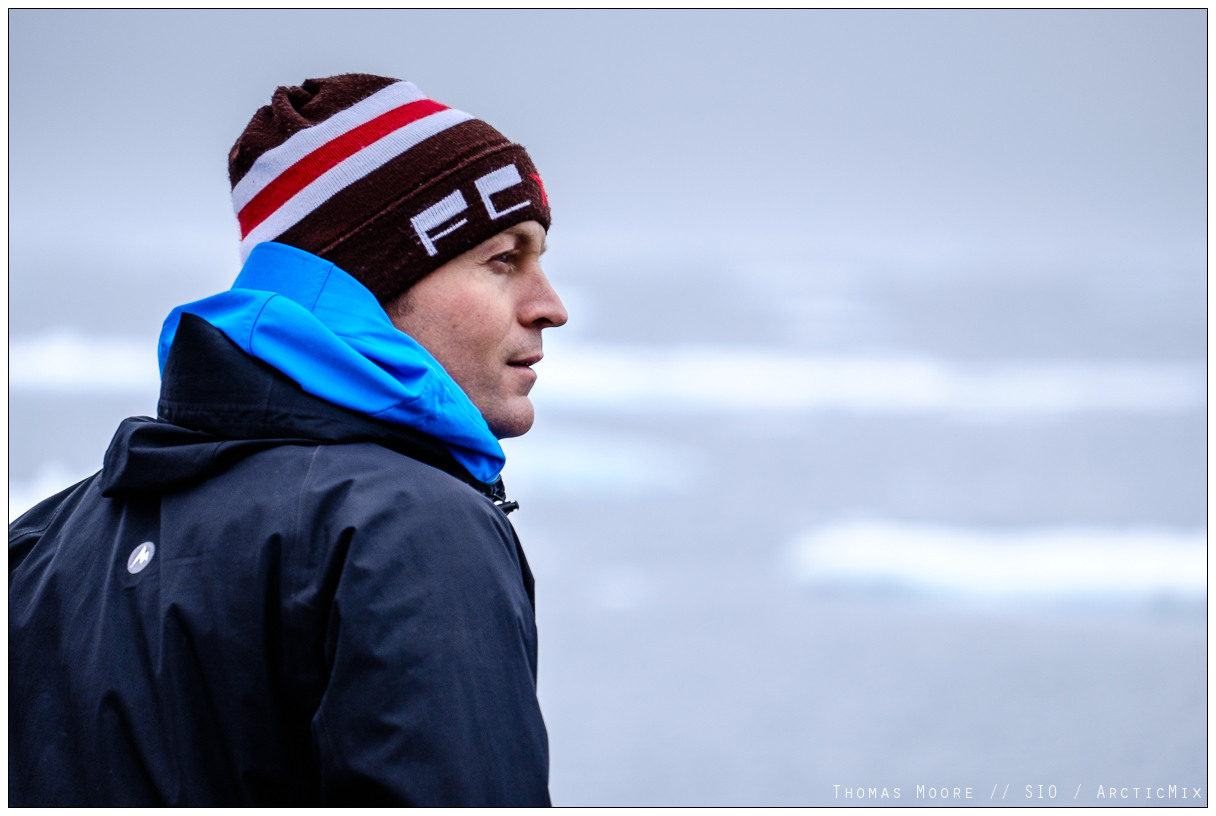 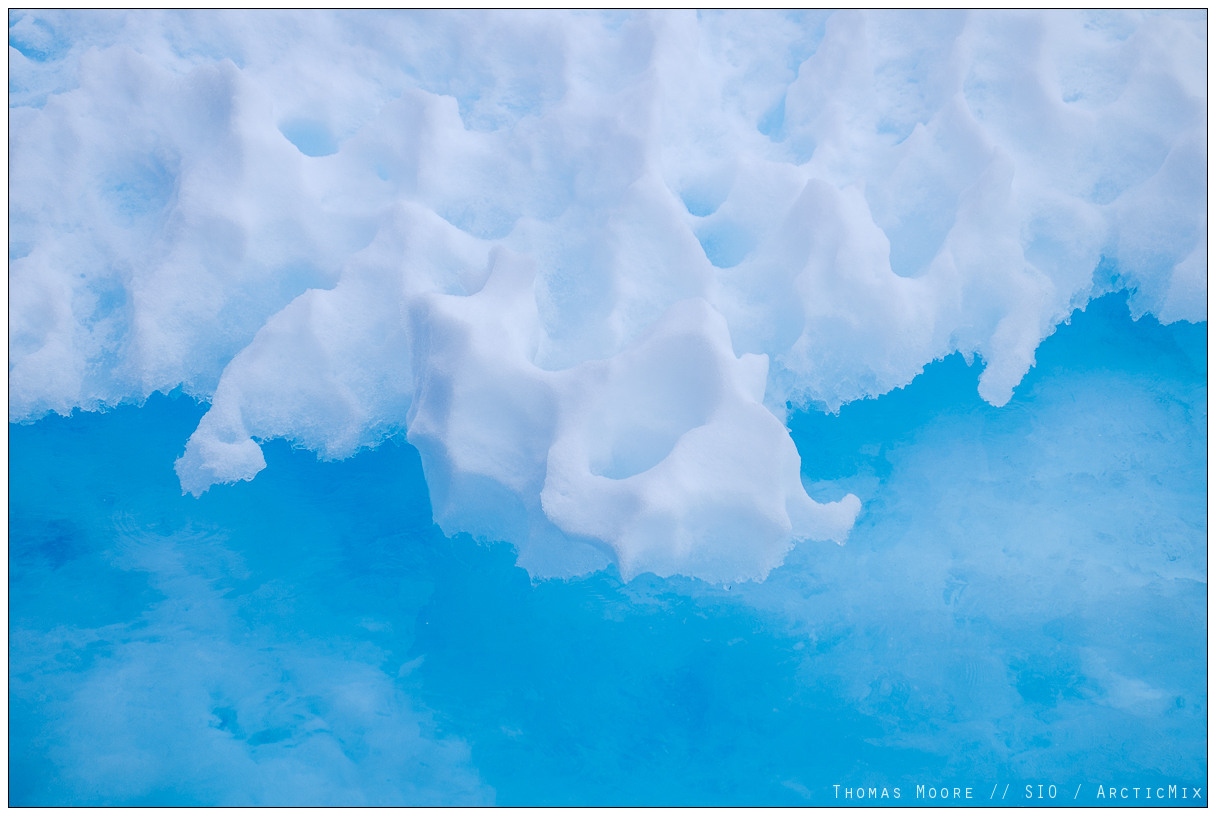 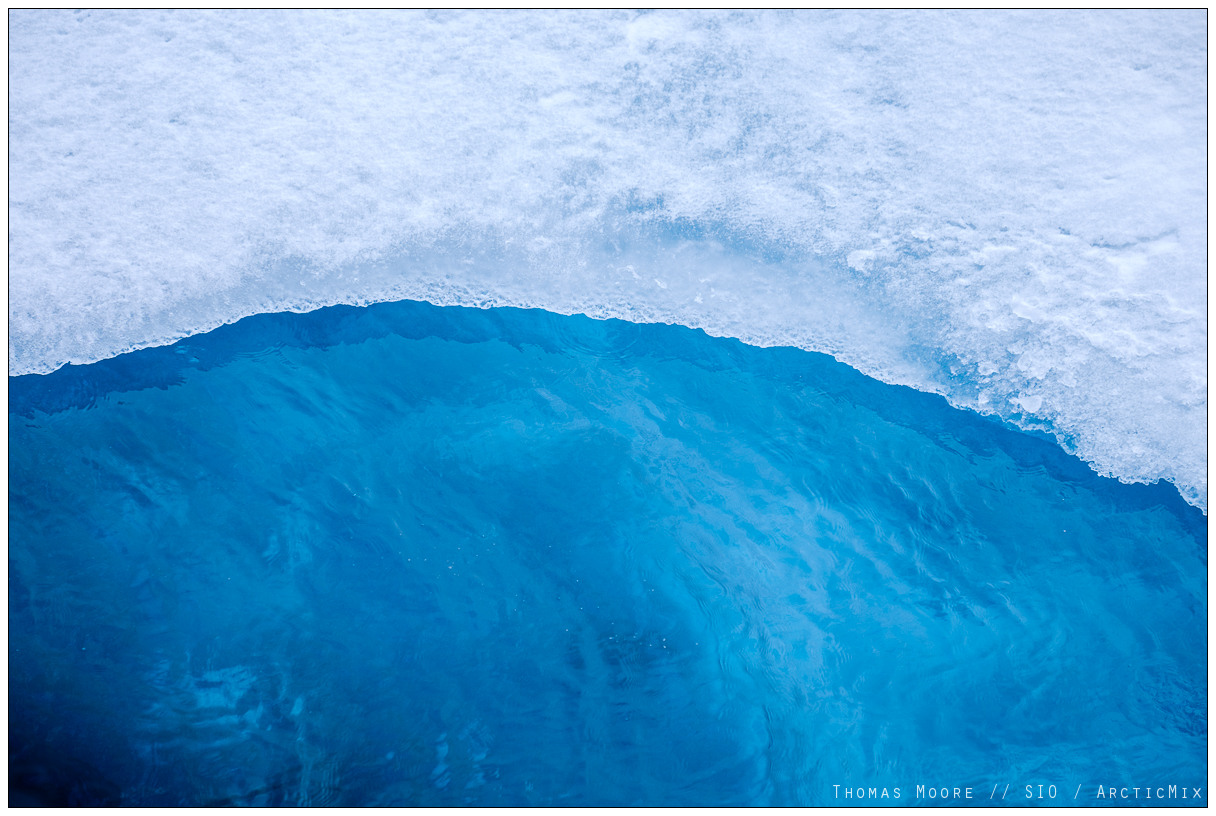 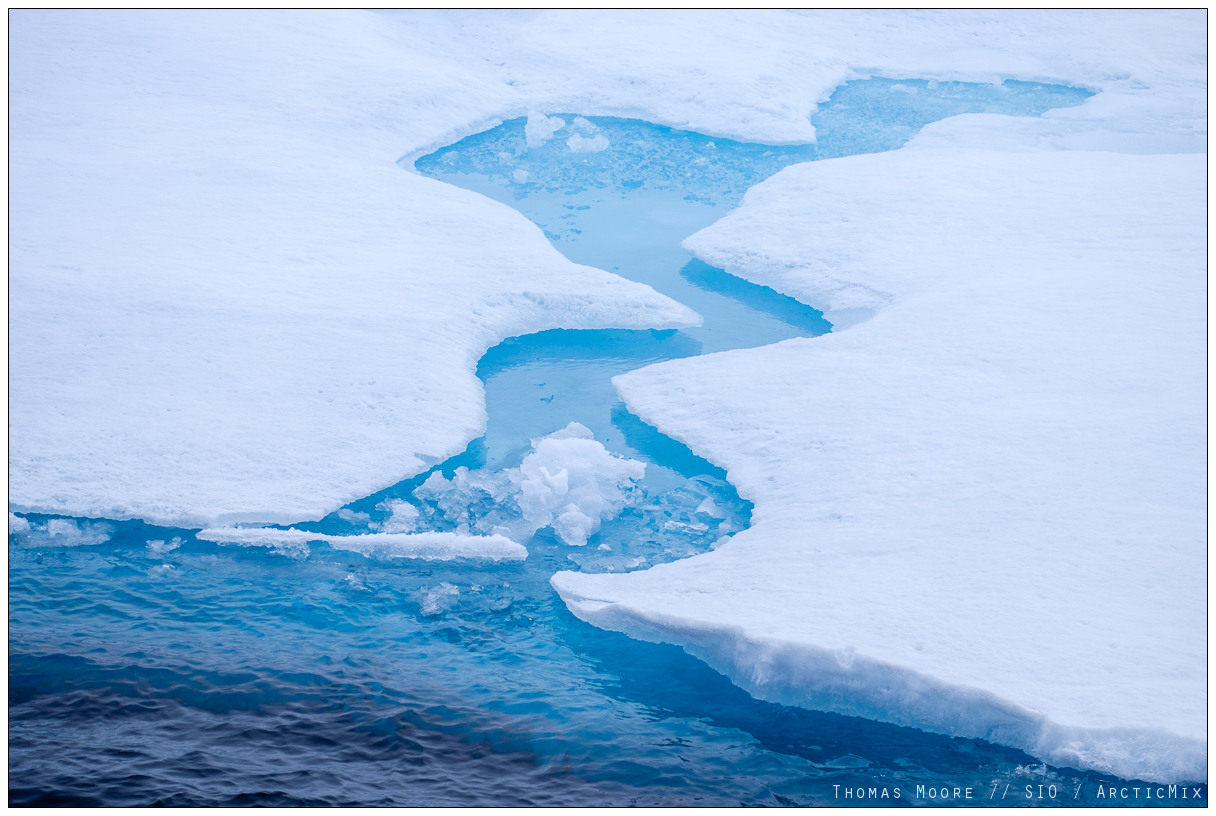 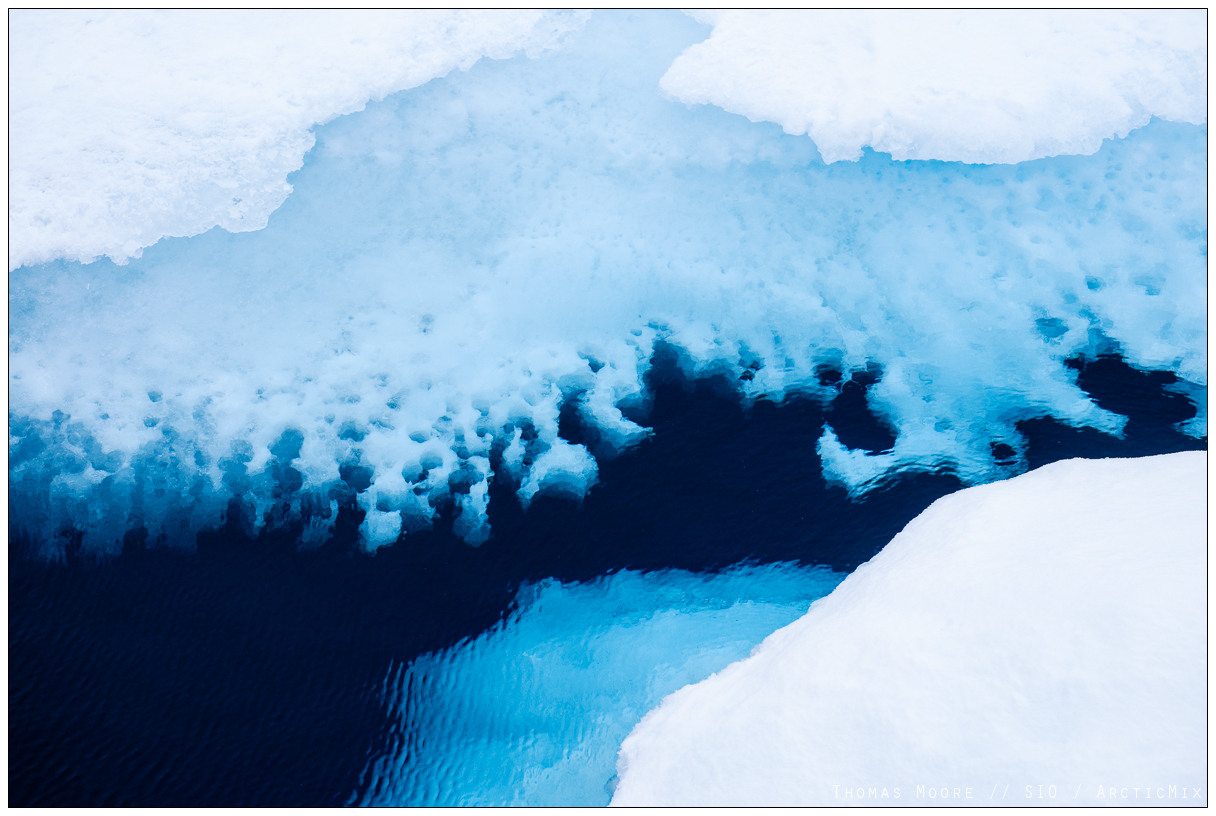 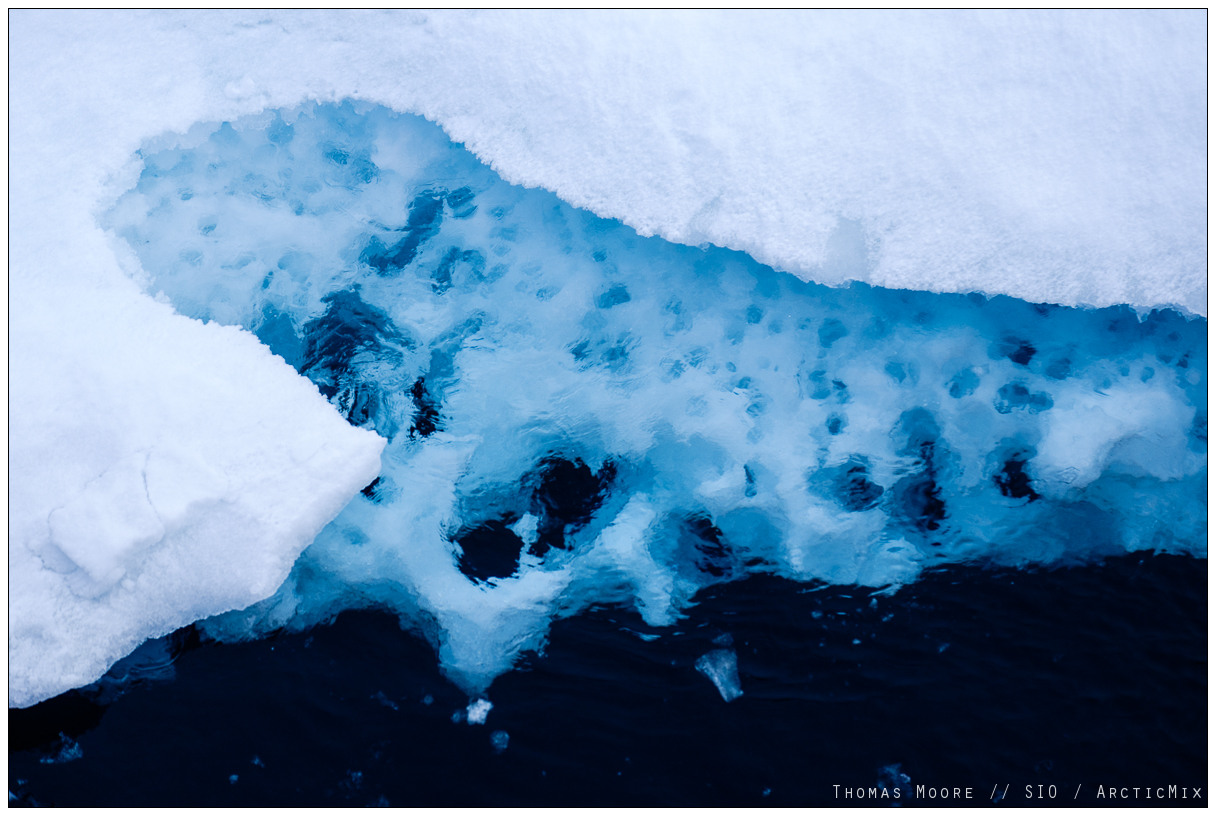 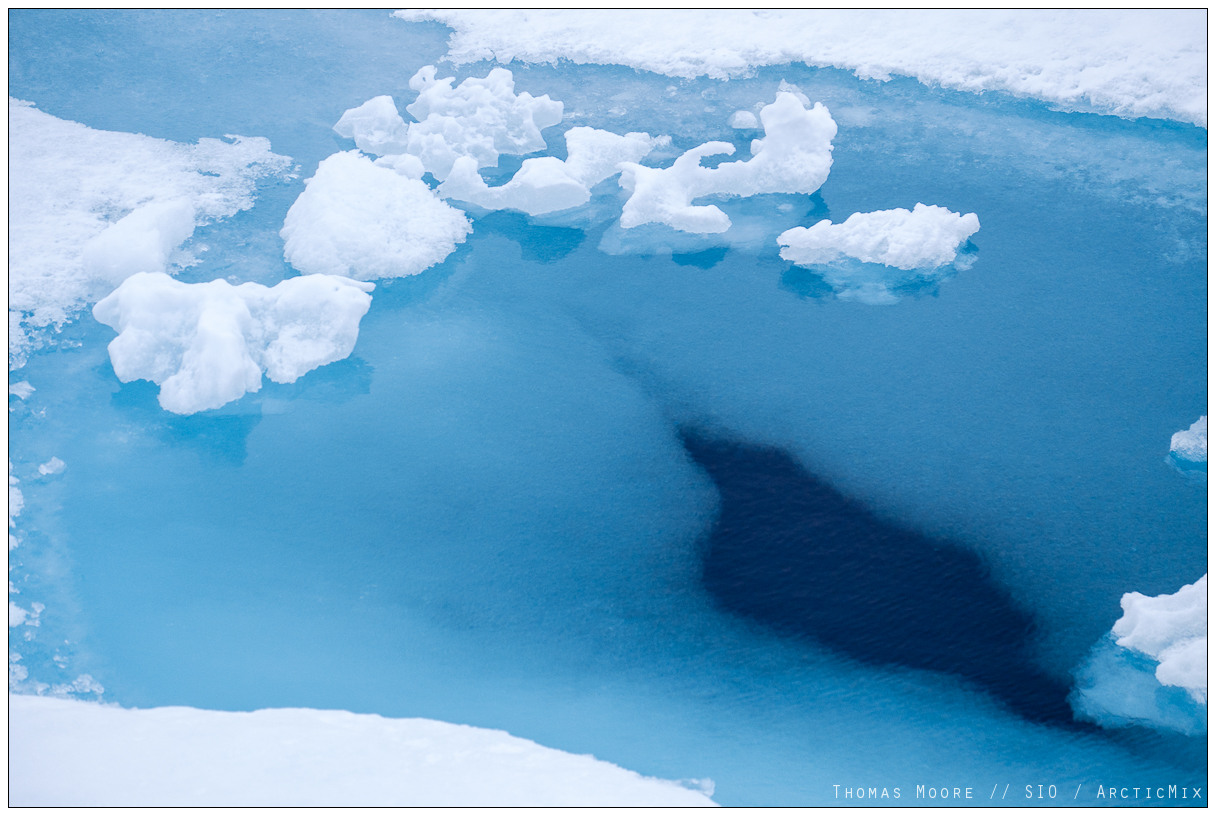 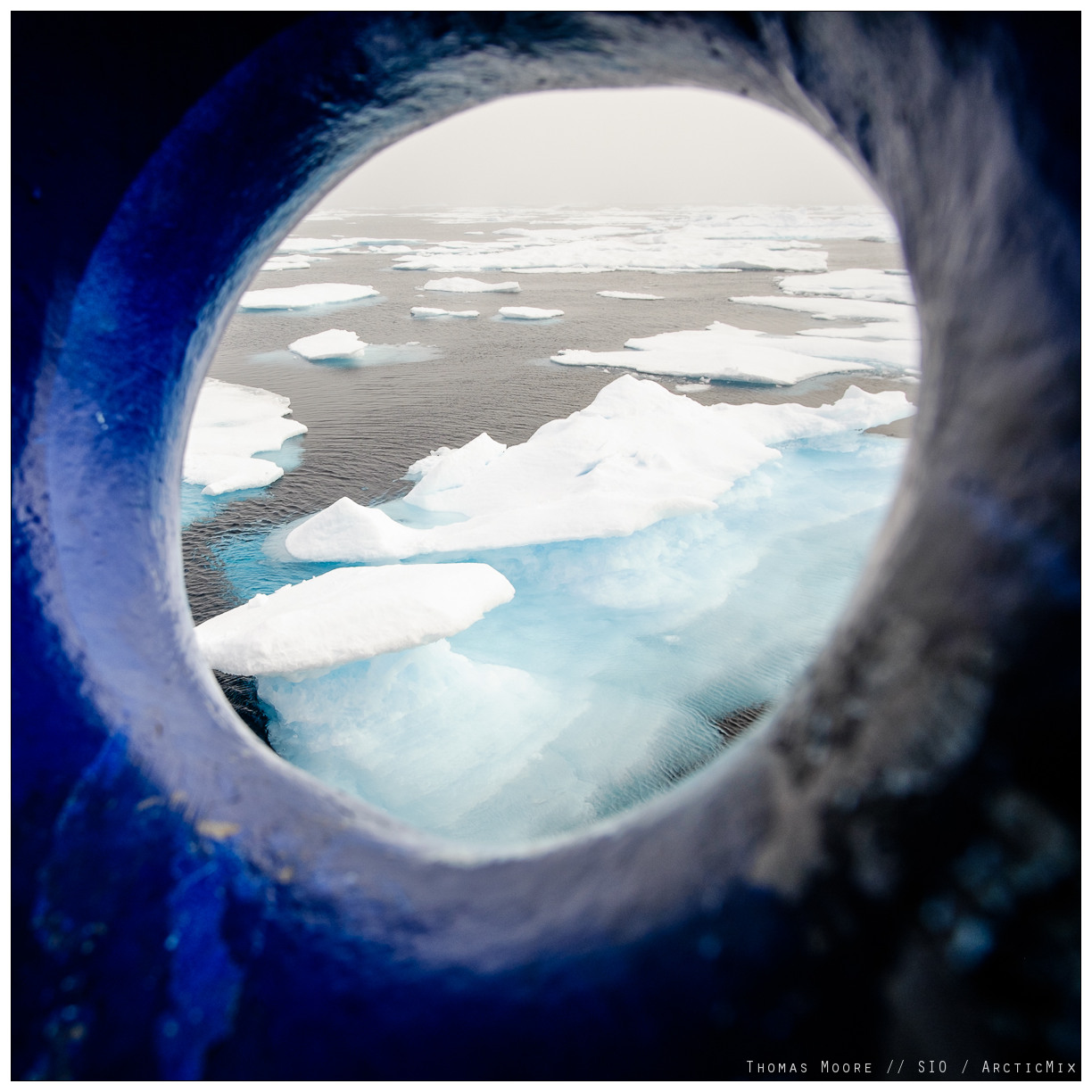 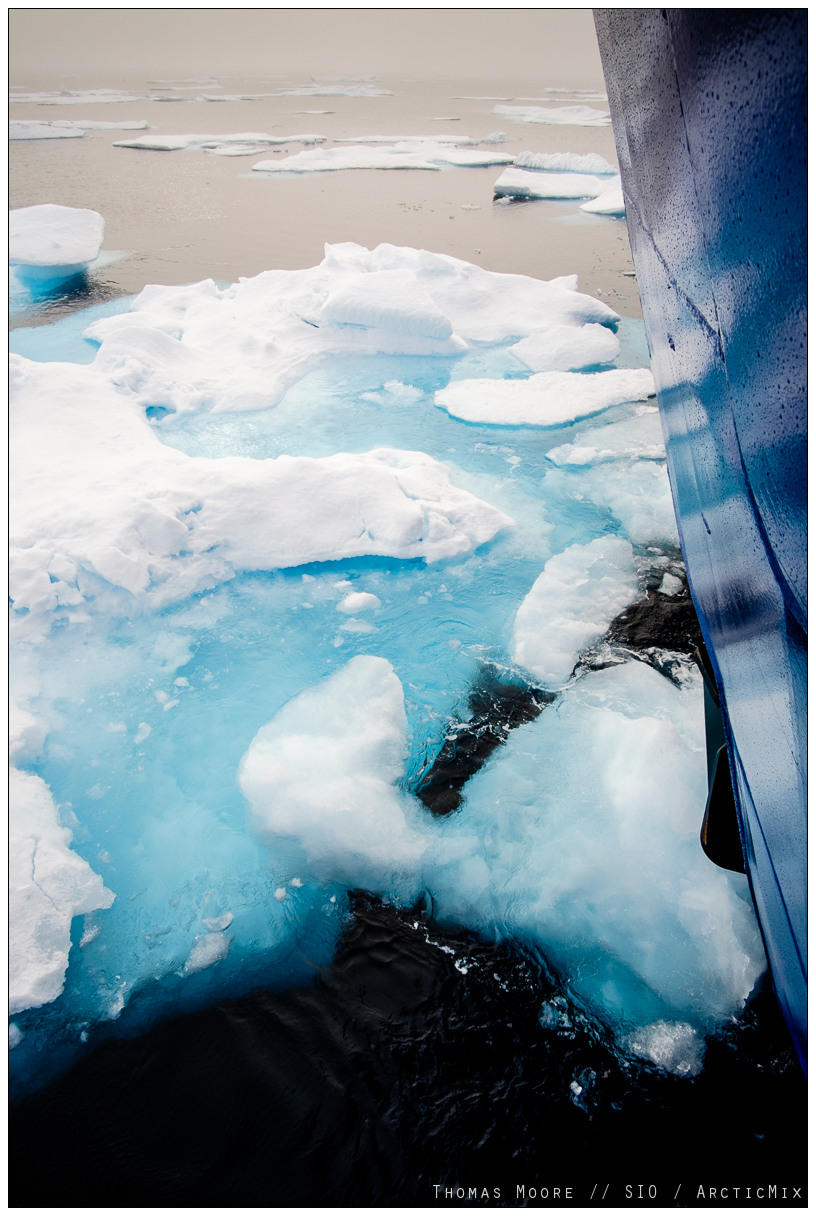 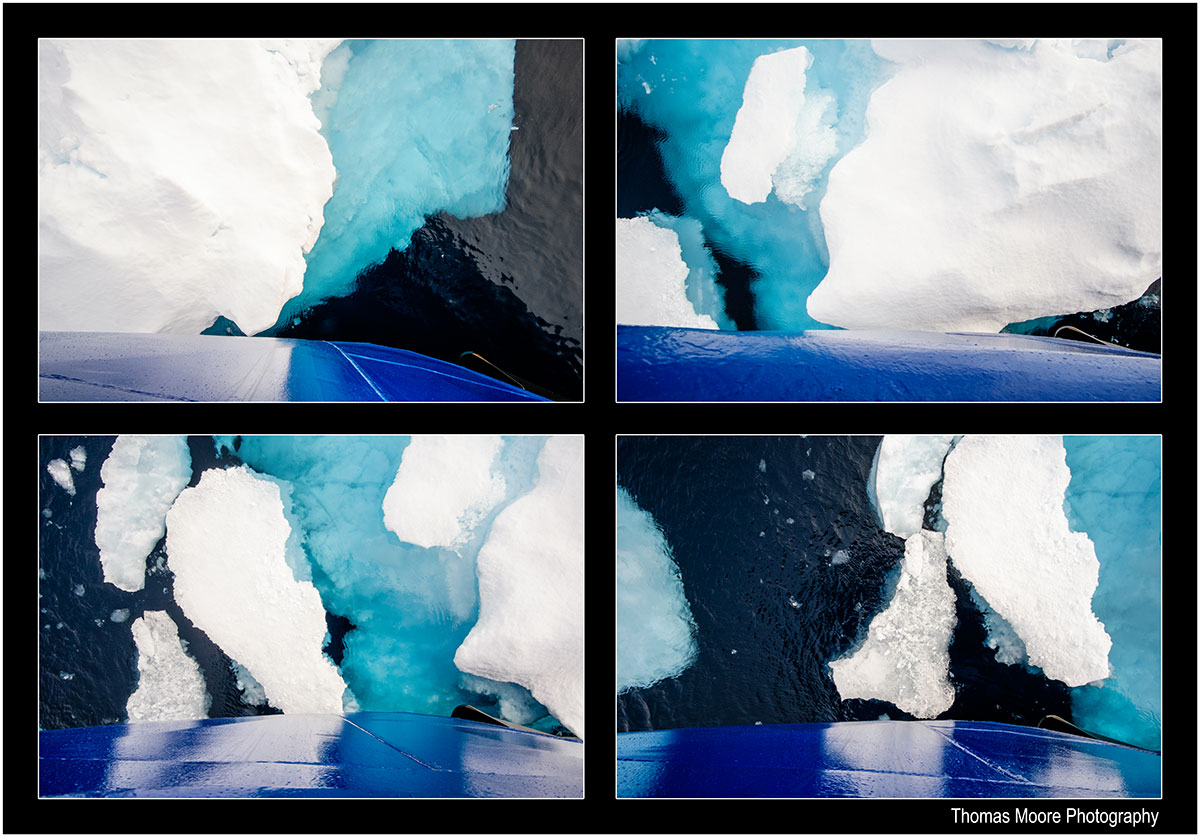 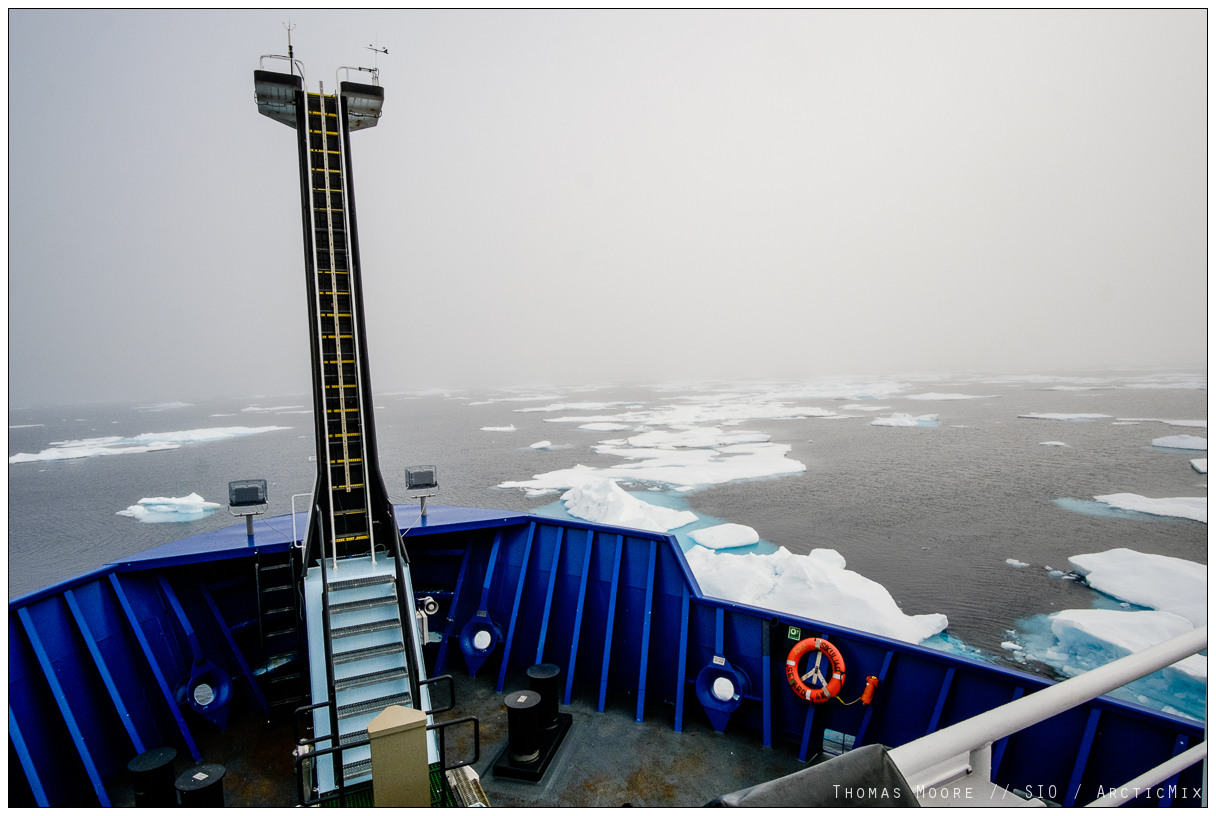 R/V Sikuliaq in the ice.

Use this map to track the research vessel Sikuliaq